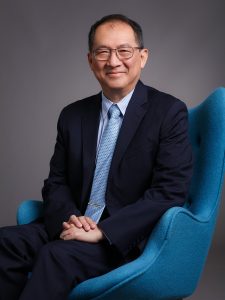 He received BSc in Electrical Engineering from National Taiwan University in 1977, and MSc and PhD, also in Electrical Engineering, from Michigan State University in 1980 and 1983, respectively. He was elected an IEEE Fellow in 1997. Dr Chuang has held various positions in several multinational organisations including Broadcom, AT&T, Bellcore, and General Electric. Furthermore, he has also served as a Professor in the Department of Electrical and Electronic Engineering (now ECE Dept.) of the Hong Kong University of Science and Technology (HKUST) from 1993 to 1996. Dr Chuang is experienced in taking research through engineering to commercialisation for communications technologies, from algorithms, chipsets, platforms to applications.

In the 1980s, he studied personal and mobile communications at GE and Bellcore when modern digital wireless communications technology was at its infancy. His work on the delay-spread effects, was included in: “The Best of the Best – Fifty Years of Communications and Networking Research”, published by the IEEE in 2002.

The 1990s saw Dr Chuang active in teaching and research in Asia and involved in development of 3G and beyond technologies. At HKUST, he established the academic and research programme in wireless communications and helped establish this new university as a major research powerhouse. From 1996 to 2001, he was with AT&T Labs where he worked closely with AT&T Wireless on 3G systems evolution based on EDGE and WCDMA. He helped propose an OFDM-based system as a 3G alternative in 1997, which was a decade ahead of its time, similar to the 4G systems today.

In 2001 he started his career in development and engineering in the IC industry, which is crucial in bringing wireless services to affordable consumer units, first as the Chief Scientist of Mobilink Telecom and later with Broadcom following its acquisition of Mobilink in 2002. At Broadcom, his team was responsible for providing modem software and platform support for Broadcom’s mobile communications chipsets from its inception.

Over the decade since joining ASTRI, Dr Chuang and his team are leveraging the collaborative efforts among government, industry, university and research organisations to drive the advancement and commercialisation of enabling technologies for 4G, 5G and beyond. Specifically, his team currently provides open platforms to enable affordable and customisable solutions, such as end-to-end 5G and smart mobility technologies for current and future applications.